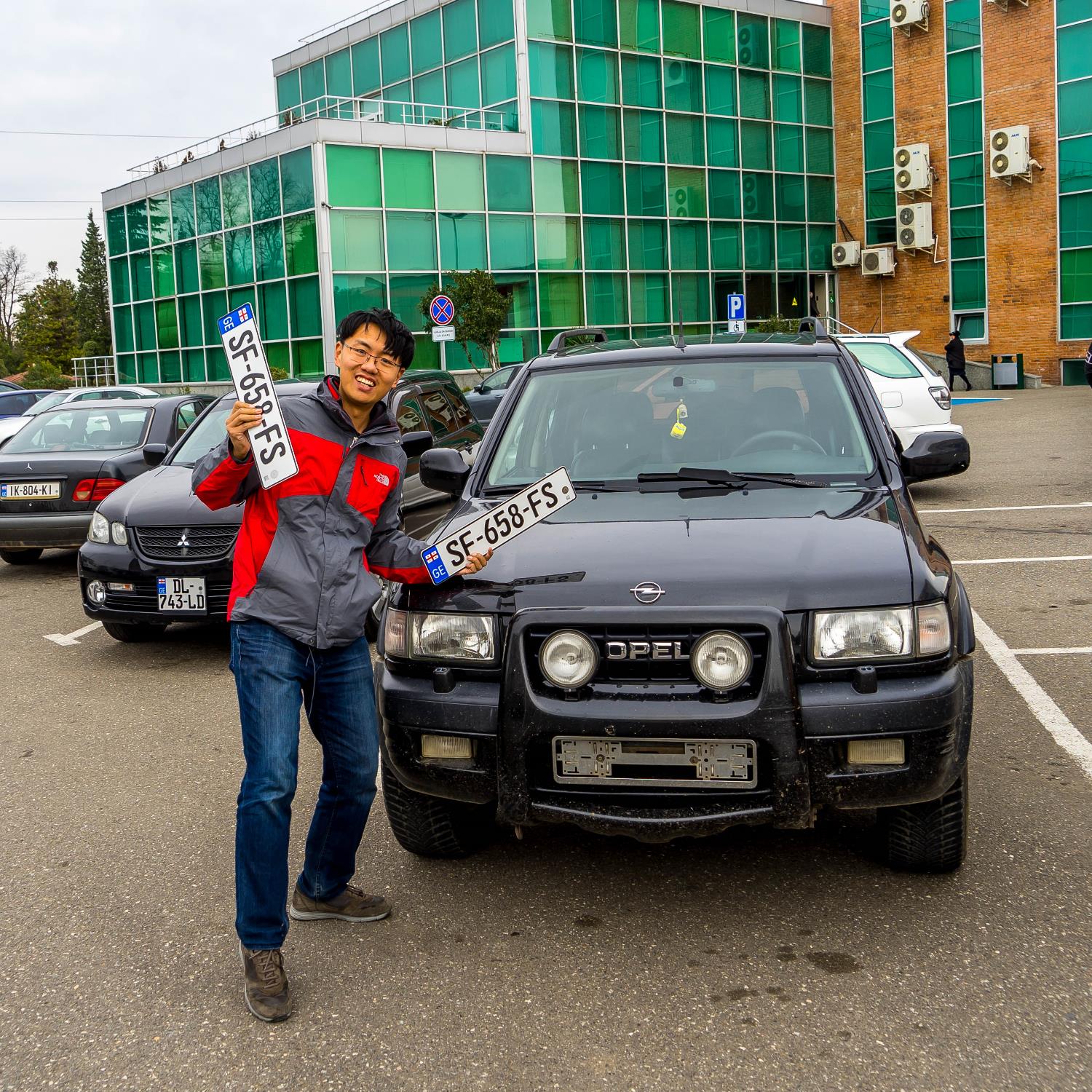 We used Google Translate to translate this blog from Chinese to English. Some translate errors were already fixed by us. However we are sorry for other errors from auto translation.

What should be used to carry a global trip ?

Airplane ? In theory, two flights can circle the earth, not challenging.
Train ? It sounds interesting! However, the scope of the activity is limited to the periphery of the railway.
Bus ? It is well-connected, but it is scheduled to start at a fixed time, so that you can only wait for too much time on the road.
Is the bicycle even walking ? Hey… such a difficult challenge, hope next time…

For those who are determined to make a truly long-term global trip, nothing is more appropriate than self-driving . In developed countries in Europe and North America, and even Japan and South Korea, there are countless travelers who have already drove their cars and embarked on a journey around the world.

They have a common name: Overlander .

The “Off-Road Bus” seen at the Kashgar Hotel in Xinjiang, all the way from the UK:

The “RV” seen on the beach in Sharjah, UAE, was actually modified with military trucks…from Germany.

In fact, even in China, it is not a new thing to go abroad by car. The Manzhouli Port on the Sino-Russian border is the starting point for most people to choose. Only in the first half of 2017, there are more than 200 self-driving vehicles going out here – an average of more than one per day!

Some of them chose to travel only in Russia, and more people went back to the Atlantic side of Europe and get back. Some even drove to Africa – tens of thousands of kilometers.

The plan of Molly and me is a little bit more than them – in addition to crossing Asia and Europe , passing through Africa , crossing the Atlantic , reaching North America and South America , and finally crossing the Pacific Ocean and returning to Asia. End this round trip around the earth *, the whole journey:

Why not buying a car in China?

Buying a car in China is undoubtedly the first choice, however…

The most troublesome thing is:

To drive a Chinese car out of the country, you must have an ATA Carnet , which is not troublesome or expensive, but you must pay tens of thousands of deposits. The validity period is only one year at most, you must return to China before the expiration, or you have to run a lot of effort (and have another deposit) to extend the period, the loss of interest will be tens of thousands. And our global itinerary is expected to be at least a year and a half .

It is not so easy to buy a car abroad. First of all, most countries do not allow people with short-term visas (including tourists) to buy a car. Should we go there attending a school or finding a job only for purchasing a car? A few countries allow that, but you have to pay for insurance and road tax every year, even several times higher than in China!

Fortunately, there is this wonderful existence of Georgia .

Most people know about this country, only the beautiful scenery of Svaneti, plus the delicious Kachapuri (cheese cake) and cheap local wines.

Few people know that Georgia has another name:

The World Bank’s ranking of the business environment , Georgia ranks 9th in the world o’f 190 economies !

And in the ” registered property ” related to buying a car , Georgia’s ranking is: the world’s fourth !

In the forefront, the most developed countries such as the United States, the United Kingdom, and Singapore; and Germany, France, and Japan, the rankings are not as good as those in Georgia – you know, Georgia’s per capita GDP is only 4,000 US dollars, the world ranking is 100+, even NOT as good as Iraq .

It is also from the former Soviet Union, which is supposed to be the hardest hit by corruption, but the government here is incredibly clean and efficient:

I once found an article on the Internet, an Australian tourist said that he bought a car in Georgia: the whole process of the procedure, tooks less than half hour , the charge is only about 30 USD! The only needed are passport and mobile phone number. How about insurance and the tax on vehicles and ships? There is not – in other words, you can just drive the car before it’s dead and there is nothing to pay to the government.

While Georgia is a party to the United Nations Road Traffic Convention (mainland China not in), vehicles registered here have the right to travel to all Contracting States (including most countries in the world) and are fully legally and compliant.

Not only for buying a car, but all the Chinese people we know in Georgia, who are doing business here, are all praise their governments. Not one have been harassed or bribed by officials here, and hey do have enjoyed their all services.

How to buy a car in Georgia?

Buying a new car in Georgia, the process is almost the same as in everywhere – the general is to go to the car dealer (4S shop) to pick up the car to pay, and they will help you get all the rest. Because of the low tax rate, the price is also cheaper than China, especially for luxury imported cars.

But this time, we are buying a used car . There are two used car websites in Georgia: autopapa.com and myauto.ge, both in English. They are not only the first choice for locals to buy a car, but also because they are cheap, attracting people from many neighboring countries to buy. Autopapa’s car is mainly used cars imported from Europe, America and Japan. And myauto, most of the information is directly sent by the local owner.

How cheap are the used cars here?

Some people say that the cars above are too old and the mileage is too much. In fact, the used cars here are the original cars in Europe, America and Japan. The maintenance and accessories are much better than the domestic ones. There is no problem at all.

The above website price is generally 10%-20% of the bargain space.

In fact, we once thought about buying luxury cars like X5 or Cayenne, but think about the  expensive maintenance, plus the fuel consumption that we can not afford … Finally we decided to choose a cheap and durable Japanese 4×4 Off-road vehicle. Well, there are two other conditions: automatic gear and left wheel.

The initial choice was Mitsubishi Pajero IO , a reduced version of Pajero. This car has the nickname “Flying Deer in Snow”, with high reliability and off-road capability. The price is also very affordable, about 2,500-3,500 USD.

Because we didn’t buy it, so here is only the picture from Wikipedia.

To buy a car in myauto, just call the phone owner / send a text message / send whatsapp on the line. Many young people will have basic English, while older people one speak Russian and are slightly more troublesome. In short, with the help of hand dance and Google Translate, most of the communication problems can be solved.

However, after trying nearly 10 cars, we found two serious problems:

At this moment, I would like to thank ae predecessor of the self-driving Asia-Europe, he said: Why not look at diesel cars? Many Isuzu diesel pickups are cheap and durable. The key is that the fuel consumption per 100 kilometers is even less than 10 liters. In addition, the price of diesel in Europe is generally 20% lower than gasoline. The comprehensive cost is only half of that of similar gasoline vehicles!

The Isuzu diesel pickup was not found, but we found two Opel Frontera diesel off-road vehicles. We found that: This car is simply the European version of the Isuzu Rodeo SUV rebranding ; and Rodeo, in fact, is a pickup truck with a passenger car body !

Isn’t that the car we want?

We have seen both of them: Both cars are 2000 cars, one for only 2,400 US dollars , but the car situation is really worrying: the alarm lights are “all on”, the steering wheel can not be fixed, and the air conditioner is also bad. Give up.

The other one is asking for $3,500. The car condition is much better compared to the car. The equipment in the car is basically usable. There is no big accident in the whole car. We asked a friend who speaks Russian for helping us bargaining. The finally price on the phone is $3,200 . Take it!

How to do the paperwork for buying a car

Is it really only half an hour to buy a car in Georgia?

We obviously don’t have a Georgian address, and almost thought that the formalities could not be done. The staff there offered a workaround: use the seller’s address. Anyway, we didn’t plan to drive in Georgia, and if there is any camera in Georgia (I have never seen it). Just do it!

Then there is the license plate selection number: the number that can be selected is placed behind the counter. You can also choose any number you want, but you will need additional production time and fees. Do not toss, choose this SF-658-FS.

After the installation, the driving license was also freshly released. Since then, this car has been permanently owned by us! Time consuming: 5 minutes

Yes, as long as 20 minutes, you can become a legitimate car owner in Georgia, pro test! !

Well, the next step is to transform this 18-year-old car into a car that can be used around the world!

One thought on “We bought a 4×4 with $3,200 in Georgia and started the overlanding trip around the world.”